From the Haftarah for parashat Matot/Masei, 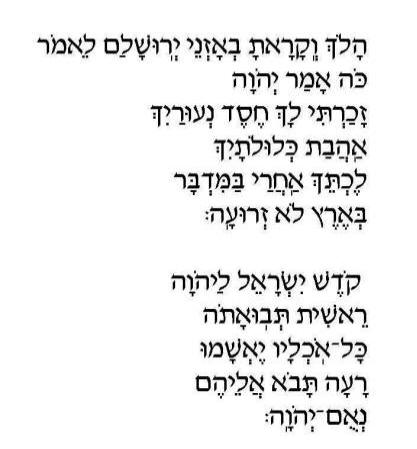 Go, cry out to to the ears of Jerusalem, saying:

Thus says Ad''nai:
I remember the loving-kindness of your youth
Your love, like that of a betrothal
Your following after Me in the wilderness
In a land not sown.

Holy is Israel to Ad''nai
The first of G''d's harvest
All who eat it will bear their guilt
Evil shall come upon them,

In many ways it is against my nature and philosophy to wish that evil befall anyone. Yet those who seek to devour Israel are eating of the fruit of G''d's first harvest, and as such they will incur guilt, for which there will be consequences.

May all who live in Israel, and all Jews everywhere also recognize the sacredness of their being the fruits of G''d's first harvest, and, as did our ancestors, follow after G''d and G''d's ways in this modern wilderness in which we live.

Let us all pray and watch out for all those caught in between those who would eat of the sacred first fruits, and those who are the agents of enforcing G''d's herem (proscription) against such consumption. May G''d protect those drawn into service as agents to protect and defend Israel, the bikkurim, first fruits, of G''d's harvest.

Most of all, let us pray for peace.

Some Previous Musings on the Same Parasha

Matot 6765-Even Moshe Rabbeinu Had to Punt
Matot-Masey 5764-Putting the Kids Before the Kids
Matot--Masey 5763-Over the Top
Matot--Masey 5762--The Rebel's Complaint and Promises, Promises